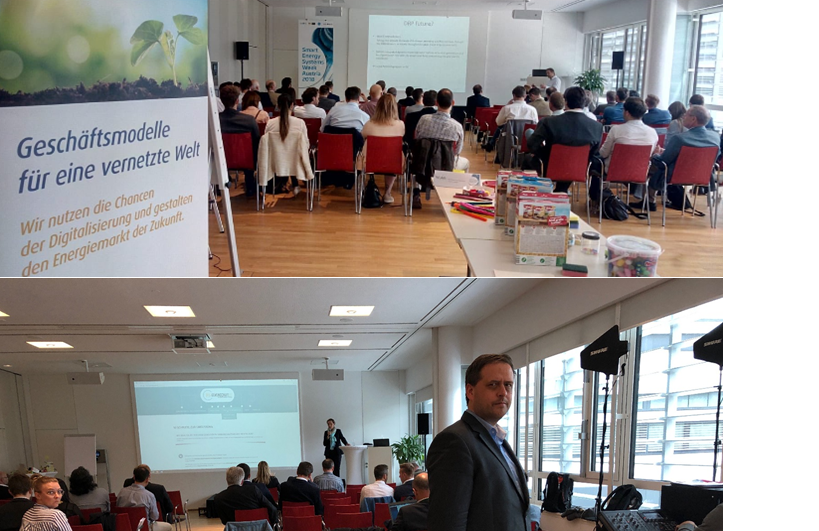 Andrej Gubina (University of Ljubljana) and Andreas Tuerk (Joanneum Research) represented STORY in the 2-days start-up and innovation days part of the annual smart grid event, organized by Hemma Bieser from Austrian company AvantSmart. It was part of the Smart Energy Systems Week Austria, SESWA 2018, that took place between 14.-18. May 2018 in Vienna, Austria.

They both moderated small workshops, partly in open space format, which brought together established market actors, DSOs, SMEs and startups to discuss the opportunities of the upcoming new electricity market frameworks and possible business models in the energy sector, focusing on electricity, heat and ICT challenges. Austria just recently implemented regulatory framework changes, allowing local multi-apartment sharing of the PV-produced electricity. In addition, the regulatory changes of the upcoming new electricity market directive and in particular Local energy communities (LECs) were an important feature in several discussions, where also experiences and insights gained in the STORY project contributed to the dynamics of the discussions.

In particularly, the motivations for establishing and joining LECs were discussed, several participants highlighted that a possible energy price reduction may not be the main incentive in Austria. In contrary, LECs may be highly interesting to those segments of the population who are already frontrunners, produce electricity themselves and are currently investigating next technological steps, such as storage investments. To realize LECs, technology providers were therefore seen as important driver. An important role could also be attributed to new service providers that could possibly more easily unlock local flexibilities than some of the incumbents and may complement them in the operation of the energy markets and grids.

Another important discussion topic was sector integration that was considered to be highly important for increased decarbonization of the energy system, including energy, farming, transport and ICT sectors. The two days discussions were seen as timely for the preparation of next steps in the regulatory framework development. During Austria’s presidency of the EU Council, the adoption of the electricity market reated parts of the “Clean Energy for All Europeans” package is expected.