Demonstration of storage in the factory Li-Ion battery installed in industrial zone Navarra, Spain Duration of demonstration: April 2016 - May 2020

For this purpose, a Lithium-ion battery is installed in addition to the existing PV Plant in EXKAL’s facility, to reduce its demand charge and the energy consumption from the grid, generating power and energy savings.

Demonstration of storage in the factory

Exkal demonstration in STORY is based on a storage system with Ion- Lithium battery, adapting an existing Photovoltaic Facility of 112,70 kWp installed on the roof of the factory for instant self-consumption, into a storage facility, focus on several targets:

For the dimensioning of the storage system, we take as starting point for this demonstration:

“It’s a great opportunity to show that the storage of energy is a reality that has already arrived, and will change our future.”
Clemente López Gilardi, Exkal 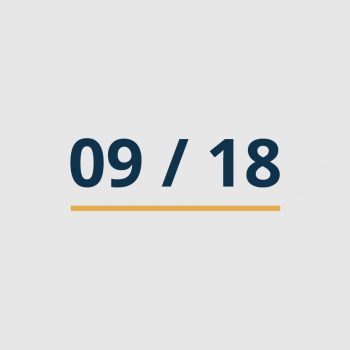 A new strategy is implemented, that allows the charge of the battery from the grid and includes consumption and generation forecasting.

Changes on BMM: tripping coils and software modifications on the battery as part of guaranty system. 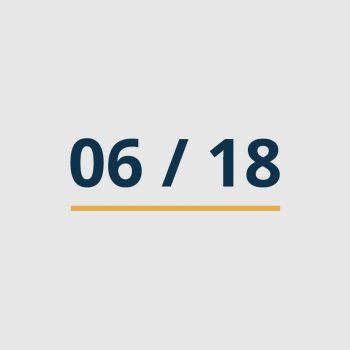 Changes on the consumption profile due to modifications of the manufacturing process in EXKAL. 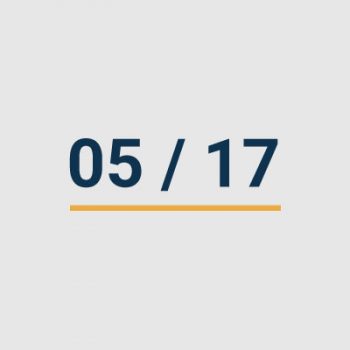 May 2017 - May 2018: The consumption of the factory decreases due to a restructuring, so the strategy is adapted accordingly.

Start-up of the facility by SAFT and CENER, with the support of EXKAL´s personnel. The system is running without remarkable problems since the start-up. 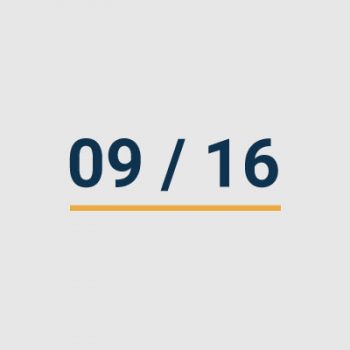 Transportation and installation of the Store system at EXKAL, in Marcilla (Navarra) 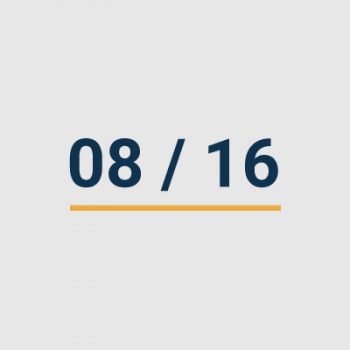 Proofs of the storage system assembled at CINERGIA 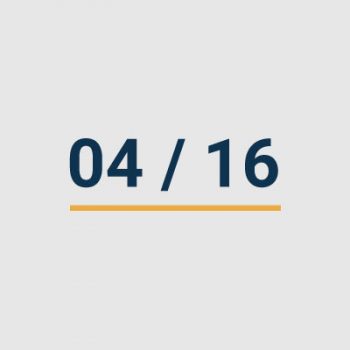 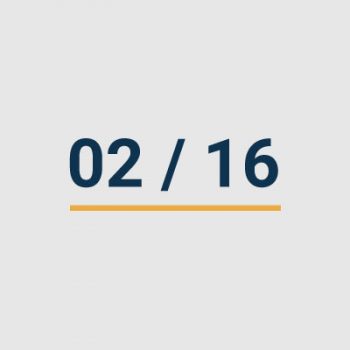 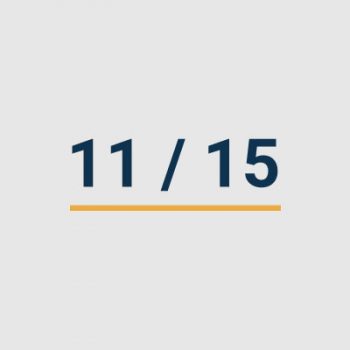 Overview of available data for demonstration 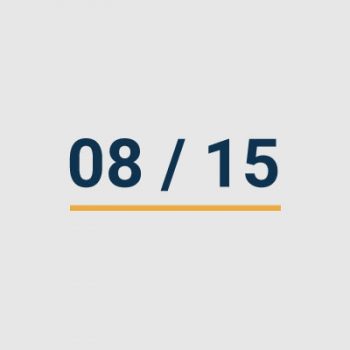 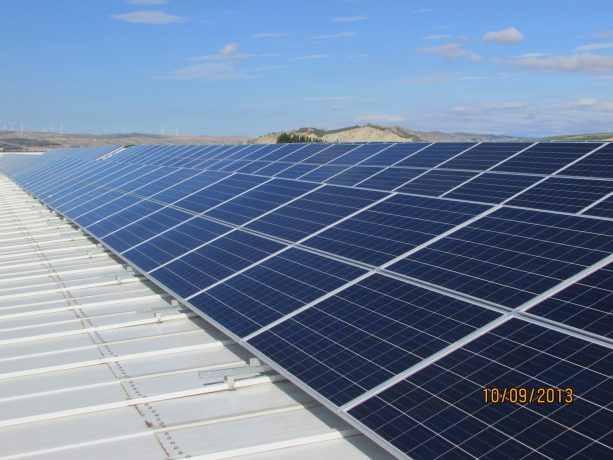 PV Facility placed on the roof of the warehouse of EXKAL in Marcilla, Navarra

PV Installation of 100 kW
The facility consists of 23 strings of 20 PV modules type LW245 of 245 watts each, for a total of 460 PV modules
Modules are fixed to the roof with galvanized structures of 25º tilt and an azimut
1 Inverter of 100 kWn
PV installation saves 158.000 kWh/year to EXKAL, equivalent to the energy consumed by 72 households and CO2, that represents savings of 102.7 Tn/year 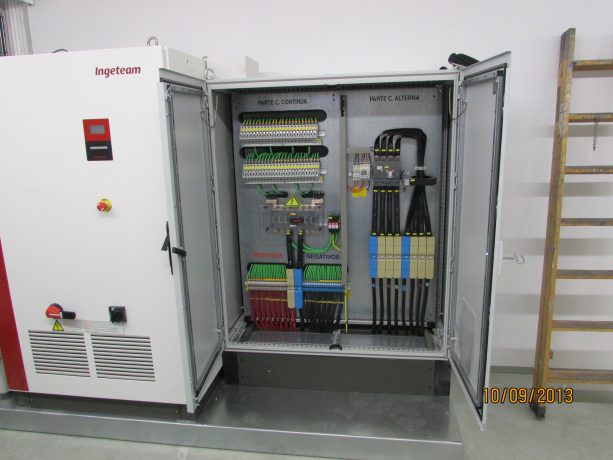 The inverter is a model Ingecon Sun 100, manufactured by Ingeteam, of 100 kWn of power. This is the device that transforms direct energy into alternative current energy (DC to AC), thus making it possible to return energy to the general grid or to our internal grid, as it is in the case of self-consumption. 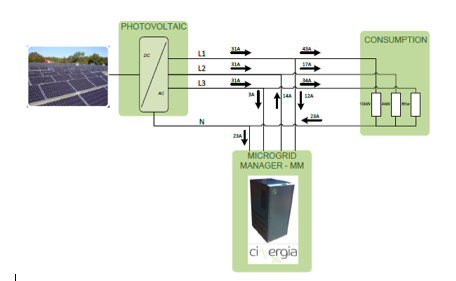 In this particular project, the decision of charging or consuming energy of the batteries will be taken by an external control system designed based on parameters as DOD, cost of energy, consumption… The MM controls the flow of energy to have these data always monitored within the limits fit by the battery manufacturer not to be exceeded. 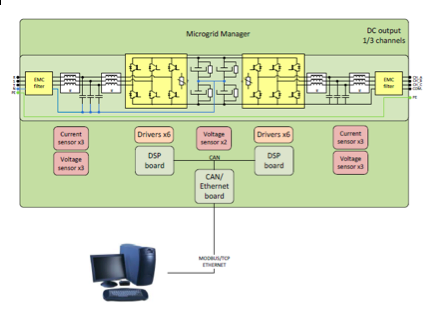 By controlling the active and reactive power Microgrid Manager MM60 may have the following functions: 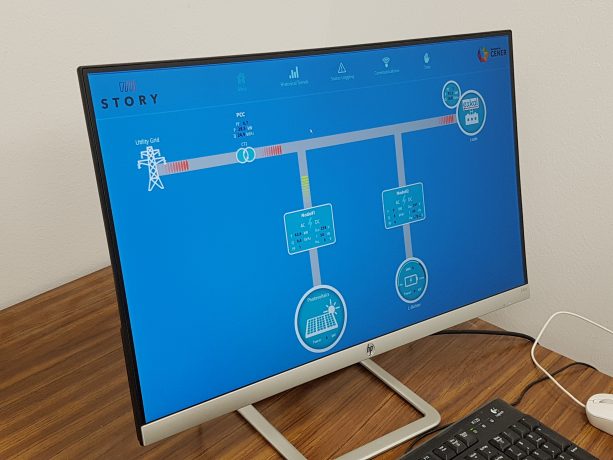 The equipment can be operated and monitored remotely via an Ethernet bus communications. A PC-embedded internally, allows the exchange of information between the internal CAN bus and the external Modbus TCP / IP (Ethernet). Thus, the Microgrid Manager acts as a server Modbus TCP /IP. 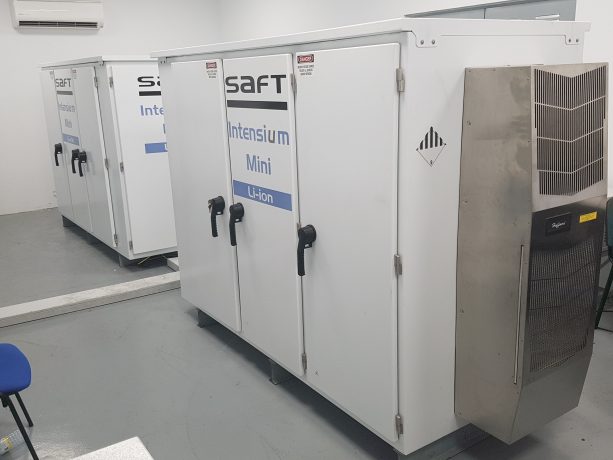 Two Saft Intensium Mini E Li-ion battery, with a capacity of 50 kW power and 200 kWh energy manufactured by SAFT, are connected to the local grid throw a power converter manufactured by CINERGIA.

Li-ion battery is charged by the energy generated by the PV facility. However, the power electronic equipment, an MM60 Microgrid Manager rated at 60 kVA / 54 kW, offers the flexibility for the batteries to also be charged from the electrical grid.

By controlling the active and reactive power, the MM60 Microgrid Manager enables EXKAL’s ESS to offer the following functions:

Storage of surplus solar energy
Reduction in peak power loads (peak shaving)
Reducing energy consumption from the grid at peak hours
Balanced consumption
Originally, the ESS was targeted at a peak shaving approach according to a pre-calculated threshold in order to reduce EXKAL’s demand charge.

Subsequently, the consumption of the factory was decreased due to restructuring and the strategy was refocused on reducing the energy demanded from the grid.